Ensuring access to an excellent local school is fundamental to the Lib Dem vision for Watford. That's why today the Lib Dems have announced we will invest £5 million to protect school funding in our town. 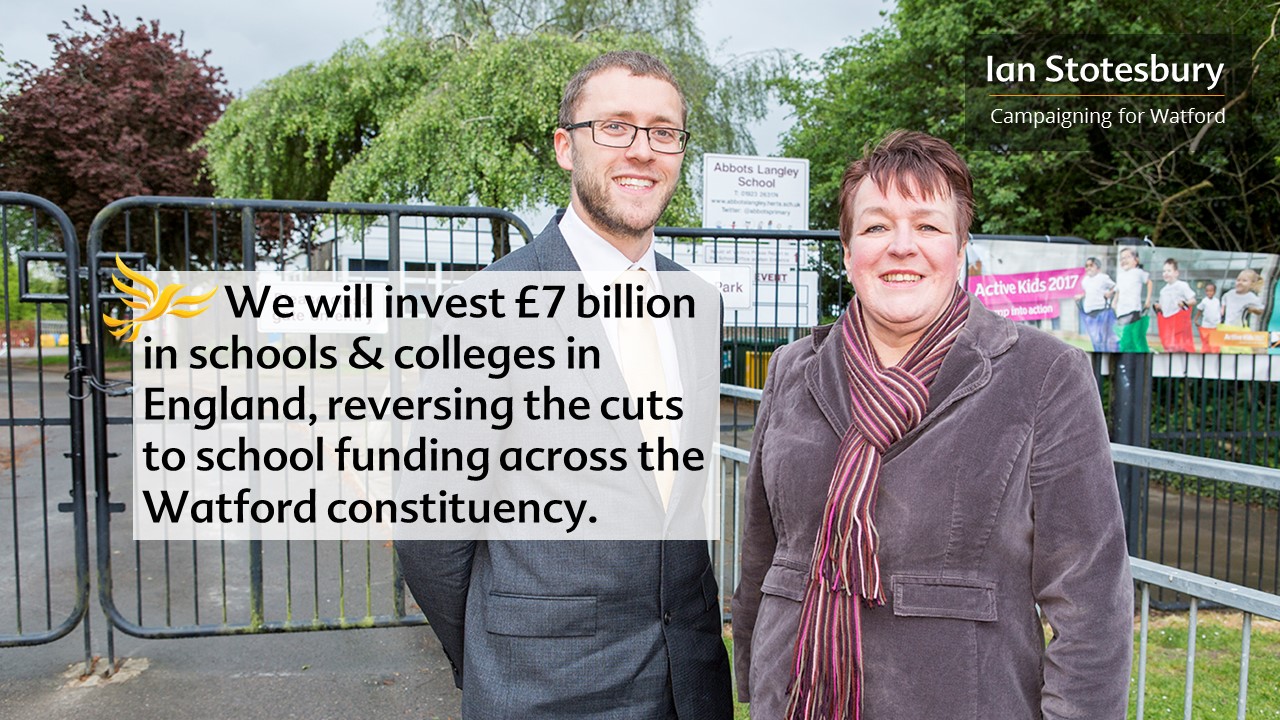 Watford's children deserve every chance to fulfil their potential and succeed in life. That's why ensuring access to an excellent local school is central to the Lib Dem vision of our town.

We're fortunate in Watford to have high-performing local schools, but the Conservatives' complacent attitude to education funding is putting their future in jeopardy. Real-terms cuts estimated at over £400 per pupil are being lined up by the government which risk short-changing a generation of our kids. We are seeing local children losing out, with Abbots Langley School losing an estimated £126,000 each year by 2019 and Watford Grammar School for Boys losing an estimated £663,000 each year by 2019.

That's why today the Lib Dems have announced we will invest £5 million to protect school funding in Watford.

Our plans will ensure no one misses out on the chance of a great education.

We firmly believe that children do their best when teachers have the freedom and resources to teach in an environment conducive to learning and success. We're proud that the Liberal Democrats are offering a realistic plan to provide that.

£2.2 million of the money would be spent on the Pupil Premium, introduced by the Lib Dems in 2011 to help teachers identify and support children who need it most.

The need for more school places in Watford is as urgent as it is obvious, with pressure on oversubscribed local services going up seemingly by the day. Growing class sizes are placing an increasing burden on teachers, who fear they will not be able to provide our children with the support they need to achieve their very best.

Yet under the Conservatives, rather than getting more support, teachers are actually leaving the profession in unprecedented numbers citing budget cuts, low morale and overwork due to insufficient government support. The education secretary was recently jeered by a conference of the country's headteachers as she explained the Tories' woeful plan for a return to fully selective education.

The Liberal Democrats on the other hand have a proud record of protecting and improving local services right across the board. For two decades we have carefully and diligently improved our town, protecting schools such as Leavesden Green from closure by the Tories and ensuring Watford is a fantastic place to raise a family.

Voting for Ian Stotesbury on June 8th will help us carry on this progress, and elect an MP who cares about the future of each and every child in Watford.