Dorothy's maiden speech in the House of Lords 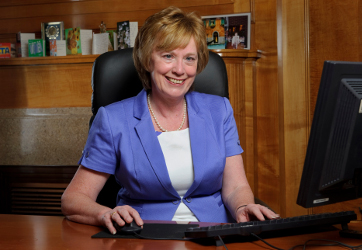 Dorothy Thornhill gave her maiden speech on the Housing and Planning Bill - a subject close to her heart. You can read it below.

Baroness Thornhill's (Liberal Democrat) Maiden Speech: "When I mentioned to my noble friends that I was excited but concerned about my maiden speech, finding my way around, not knowing the protocols and thereby making a gaffe, I was told that everyone would be very helpful and extremely friendly and to stop worrying. And that has indeed been the case. The police, attendants and the famous doorkeepers seem adept at spotting the “newbie” and asking, “Does my Lady need some help?”, and the answer is invariably yes. I should also like to thank the noble Lord, whom I did not recognise, who, on seeing me about to turn and cross in front of the Woolsack, reacted swiftly with a firm yank on the shoulder to avert disaster.

I stand before your Lordships as the directly elected mayor of Watford, a position that I have occupied for 14 years, but in a pre-mayoral life I was a senior teacher in secondary schools, specialising in the education of children with learning and behavioural difficulties and responsible for pastoral care and safeguarding. In both careers I have always looked beyond the immediate and the local and contributed at a national and strategic
level, most recently as a deputy chair of the Local Government Association. It is a great pleasure to join other alumni of the LGA across the House.

In the spirit of maiden speeches being uncontroversial, my comments are perhaps more measured and general than they might otherwise have been.

In my experience, the laws of unintended consequence and cumulative impact of several measures colliding can thwart even the best intentions. This is the case with the Bill before the House today. By concentrating mainly on home ownership and housing numbers, the Bill fails to get to grips with the real housing crisis. It is true that most people aspire to have a home of their own, but what about those for whom it is not, and never will be, possible? To achieve balanced, cohesive communities, places need a wide range of housing, from supported housing for those in extreme need to homes for both the low-waged and the affluent—in other words, mixed tenures or a variety of provision. Our hospitals need consultants and cleaners, our service sector needs accountants and admin assistants and our schools need head teachers and dinner ladies. All need somewhere to live. This is not just about the number of houses built but the kind of communities that we are creating. Towns and cities work well only when a wide range of people are able to live and work in them, without suffering crippling rents, long commutes and poverty.

I know how important it is for families to have security of tenure—to know that you will be able to stay in your home while your children grow up without having to keep moving house and school, house and school. Currently, in Watford and nationally, rough sleeping is up. The number of families in temporary homeless accommodation is up. Housing waiting lists are going up, along with rents and house prices. I fear the Bill will do nothing for the people and families behind these statistics. During the passage of the Bill, we will scrutinise whether starter homes are indeed affordable and for whom. We will seek to ensure that they come in addition to, not at the expense of, social, affordable and shared-ownership housing, and that the affordability discount is kept in perpetuity, not just for five years. Will forcing councils to sell off high-value assets, along with extending the right to buy to housing associations, result in more affordable homes or not? We will fight to ensure like-for-like replacement. Pay-to-stay means that those in social housing with a combined household income of only £30,000 are made to pay market rent or leave. Will this result in people buying their own homes, as is hoped, or, as is feared, create a disincentive to work or seek promotion, or lead to a reduction to working part-time to avoid the cap? This is not to mention the logistics of policing this policy.

In the concern about the housing part of the Bill, little has been said about its provisions on planning. Here, we are concerned that the democratic process is seen as a barrier to growth and that some of the proposed measures will severely impact on the ability of local authorities to create the kind of community they seek for their residents. It appears to strengthen further the hand of the developers at the expense of communities and their elected representatives. This is a wide-ranging Bill, with many powers worryingly reserved to the Secretary of State. At present, it lacks the detail required for effective scrutiny by both Houses.

Housing is an issue about which I am passionate. One of my earliest memories is of me, aged four, wedged next to a load of boxes in the back of a car. We were moving from Wales to Lancashire, as my parents had lost both their home and their jobs at Tenby Golf Club for the sin of having a second child. Thanks to effective legislation, that could not happen now, but it did then. I have vivid memories of the squalor we lived in for years at the hands of a landlord who, if he was not Rachman, might well have been his northern cousin. Although there are measures in the Bill to deal with rogue landlords, do they really go far enough?

There is real work to do: listening, learning and playing my part in the great work of this House, during the passage of the Bill, and in the months and years to come. In the short time I have been here, it is apparent that the expertise within the House is—to use my children’s favourite word—awesome.".