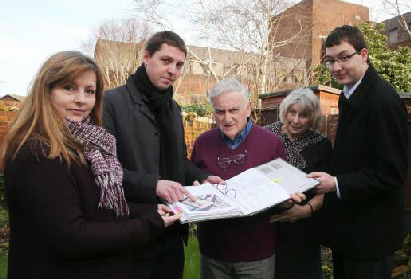 A CONTROVERSIAL plan to erect an eight-story tower block behind properties on Nascot Street and Malden Road has been condemned by local councillors and residents.

Caledonian House, on the corner of West Street and St Albans Road, has been earmarked for demolition by developer Heronslea Homes, to be replaced with 95 two and three bedroom flats and space for just 60 cars.

Cllr Mark Hofman has been working with local residents to build their campaign against ‘the biggest planning application that the area has seen in years’. Mark said: ‘This is a monstrous overdevelopment. Although residents I have spoken to agree that the site is brownfield land and will be redeveloped, the sheer scale of the application is totally out of character in the area.

‘If approved, it will dwarf neighbouring properties in the Nascot conservation area and leave some residents' gardens with no direct sunlight.’ ‘The tower block plan is also likely to disturb the privacy of residents and significantly affect the areas skyline.’

If you would like to comment formally on the plans, then email [email protected] or search the plans at www.ukplanning.com – objections are still considered even if the deadline has passed.