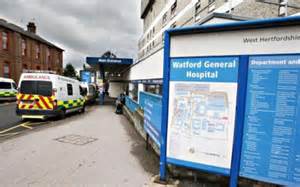 After its inspection, West Herts Hospital Trust has been put into special measures. The Trust has been ordered to make big improvements after the watchdog the Care Quality Commission rated its services as "inadequate". Chris White, county group spokesperson on Health, said: 'We had suspected for a while that the report would be bad but this is even worse than was feared.

'It is important to put into action a plan for improving the services at the three hospitals and for the public to gain reassurance that the services are on an upwards and not a downwards trajectory. The county council has the role of scrutinising the NHS in
Hertfordshire and we will be having a meeting with the inspectors next week where we hope to hear more about how quickly the many failings can be addressed.'

He added: 'There has been a long history of management instability at the trust. The most recent full-time chief executive, for instance, stayed only a short while before being - believe it or not - promoted to a different role elsewhere in the NHS. It is time the government made sure that all senior managers were of the best quality and were encouraged to stay and sort out the problem rather than leave and find more interesting jobs to do elsewhere.'